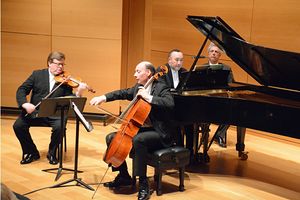 Tuesday night saw an auspicious start to the Cleveland Chamber Music Society's 2016-17 season, with a performance by the relatively new Montrose Trio.

Although only three years old (formed in 2013), the Montrose Trio plays together with a rapport born of many years of acquaintance. Violinist Martin Beaver and cellist Clive Greensmith were both members of the Tokyo String Quartet in its last decade, and they bring to their collaboration with pianist Jon Kimura Parker a well-honed communicative style. It doesn't hurt that all three musicians are consummate artists.

For their program at Plymouth Church in Shaker Heights, the trio played works by Turina, Beethoven, and Brahms. Turina's Trio No. 2, written in 1933, bears all the hallmarks of the composer's mature style: a piquant combination of Romantic sweetness, points of chromatic interest, organic structural development and, of course, flashes of Spanish temperament.

The Turina was a fine introduction to the sterling qualities of the performers. Violinist Beaver displayed a remarkably beautiful tone and a finely tuned sense of phrasing, while cellist Greensmith revealed an almost vocal quality to his playing, which brought an extra measure of interest to an instrument that can often be subsumed in a trio setting.

Pianist Parker showed himself to be nimble, witty and delightfully interactive, never allowing the piano to overwhelm the stringed instruments, an ever-present danger in chamber music.

Beethoven's striking Op. 1, a set of trios from 1795, finds the young composer already master of form and expression, taking the trio innovations of Haydn and Mozart a few steps further. Witty banter, unexpected musical ideas, and high spirits are the hallmarks of the E-flat trio of the set.

The qualities on display in the Turina really came again to the fore in the Beethoven, which was played with quicksilver tempos and a degree of alertness that could not have been exceeded. The players' enjoyment of Beethoven's sparkling score was plain to see.

Brahms' Trio No. 1 in B major requires a different sort of approach. Written in 1854, when the composer was just 21, the trio was heavily revised in 1889, retaining themes but reworking development of them in wholly new ways (and, along the way, smoothing over some of the composer's youthful rough patches).

What did remain from the earlier score (which Brahms never actually withdrew) was the sense that the composer was striving to create a work whose scope far exceeded the boundaries of violin, cello and piano. The B-major trio, like many of Brahms' early works, seems to be reaching toward symphonic form, or at least making statements that would not be out of place in a symphonic structure.

As a result, Brahms works his players hard, with big, often widely-spaced chords from the piano, and passionate statements from the strings. The Montrose Trio rose to the occasion, collectively producing a big sound that suggested a much larger ensemble. The challenges of the work are great, but the players met them with aplomb, and not a little sweat equity as well.

At the end of the concert, the Montrose Trio returned to the stage for an encore. "What would a trio concert be without a little Haydn?" Parker asked, beforethe players launched into a brilliant performance of a lightning-fast finale from one of Haydn's trios.