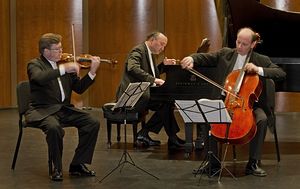 When we think of the music of Tchaikovsky, only his major achievements come to mind: the operas, symphonies, concertos or ballets. Although he evinced little interest in chamber music, his mighty Piano Trio in A Minor, played magnificently by the Montrose Trio Saturday (February 6) in La Jolla, remains a glorious exception to that overall neglect.

Written as a tribute—or more precisely a memorial—to Nikolai Rubinstein, head of the Moscow Conservatory and orchestral conductor who championed Tchaikovsky’s symphonies, the grandly designed Piano Trio bristles with symphonic aspiration, which Montrose projected with muscular authority. In the opening movement, they filled Sherwood Auditorium with a warm, effulgent sonority that invigorated the composer’s bold, declamatory statements, yet they pulled back with hushed, delicate balances for the few authentically elegiac reveries. Although the composer titled that movement Pezzo élégiaco, very few of its 20 minutes are spent lamenting the departed Rubinstein.

Because Nikolai Rubinstein was a pianist—less successful than his celebrated brother Anton in that category, however—Tchaikovsky gave the piano greater prominence in the opening movement, in which Montrose pianist Jon Kimura Parker reveled with unalloyed ardor and consummate artistry. Fortunately, the Piano Trio’s lengthy other movement, constructed on a theme with eleven variations, gave ample opportunity for violinist Martin Beaver and cellist Clive Greensmith to demonstrate their polished technique and sympathetic realization of sumptuous melody.

While the Montrose Trio has been performing together for only two years, their strongly integrated ensemble makes them sound like a far more seasoned ensemble. Perhaps because the two string players had played together in the Tokyo String Quartet before its recent retirement from the performing scene and because Parker is such a stellar collaborative musician, Montrose began with a significant advantage, one they have built upon with evident success.

Kudos to Montrose for including Joaquín Turina’s late and rarely played Piano Trio No. 2 in B Minor, Op. 76, on their program. A piece that alternates rhapsodic Brahmsian counterpoint with lyrical vignettes that suggest Andalusian folk song and dance, Turina’s Piano Trio sounded fresh and inviting in Montrose’s polished, ingratiating account. At least in San Diego, too many chamber music concerts incessantly recyle the same standard repertory, largely Germanic and 19th-century. Turina proved a welcome breath of fresh air. And might I suggest that violinists program his Violin Sonatas, overlooked works that are equally rewarding?

Haydn’s Piano Trio in E Major again gave prominence to Parker, whose interpretation of the classical repertory regularly inspires audiences. In June of 2015, his vivid Mozart Piano Concerto in C, K. 467, for example, opened that season’s Mainly Mozart Festival on a celebratory note.

Parker’s approach to Haydn may not appeal to period instrument purists, but on a modern concert grand he produces a sparkling vivacity that is at once clean and bracing. And he and his cohorts approached the humor of the Rondo finale with knowing insouciance.

This concert was given on February 6, 2015, at the San Diego Museum of Contemporary Art’s Sherwood Auditorium in La Jolla. The next program presented by the La Jolla Music Society is jazz artist Aaron Neville with his quintet at the Balboa Theatre in downtown San Diego on February 11.